In 2017 Stagecoach launched a new bus service, the ‘Little & Often’ service, which aimed to provide a connection for commuters in between Ashford train station and Willesborough Hospital. Identifying that a number of commuters were travelling from the train station to the hospital and vice versa, Stagecoach recognised a need for a connecting service in the town. The ‘Little & Often’ service comprises of Mercedes minibuses running every few minutes.

Tactical Media was tasked with delivering an engaging campaign, which informed commuters of the new bus service through effective and innovative media placement.

The campaign aimed to inform the audience of the new service and also of the launch event of the ‘Little & Often’ service. Commuters and those working at Willesborough Hospital were the primary target audience however the campaign also aimed to target those travelling for leisure.

Given the target audience for the campaign, Tactical Media identified Tactical Coffee Cups and Tactical Projections as the most effective means of delivering the campaign message to the audience.

Tactical Coffee Cups provide a unique advertising space for campaigns. 12 oz double skinned Tactical Coffee Cups are the perfect media platform for delivering your campaign message directly to the hand of the target audience. Ideal for commuters, coffee cups are a great advertising space due to their premium feel and lengthy dwell time of 21 minutes, giving the campaign message considerable time to influence the audience.

In particular the commuter audience respond well to Tactical Coffee Cups. Research by Tactical Media showed that 80% of our commuter audience purchase a takeaway hot drink at least twice per week and 62% purchase one every day. The coffee cups showed the name of the service and route of the bus. Tactical Coffee Cups were dispersed to catering outlets in the hospital. This allowed the campaign message to be delivered to the audience as they purchased their morning coffee. 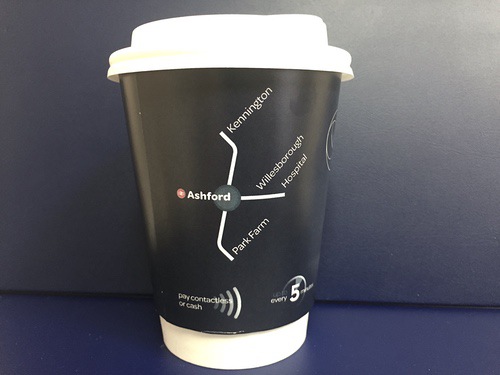 Tactical Projections are a great platform for capturing the attention of the target audience in an innovative way. Projections were beamed onto buildings in proximity to the train station, displaying information about the bus service and the launch event taking place at Ashford Designer Outlet. Projections were displayed onto locations which ensured the audience came into contact with the message both when they entered the train station in the morning and when they left in the evening, reinforcing the campaign message.

Tactical Media platforms proved to be a success in informing and motivating the target audience. Effective placement of the media ensured the audience were made aware of both the new bus service and the launch event taking place. The launch event enjoyed a large turn out and, as a result of tactically delivered media, the new bus route saw a huge uptake with the target audience.

Case Study: You're Asking For It

In the Spotlight: Tactical Coffee Cups